In my opinion Swift is an extremely exciting and powerful language so like many others I was excited when I heard Apple’s decision to Open Source Swift and even more when a Linux compatible version of Swift was released. Writing apps for different platforms with Swift sounded exciting but what immediately started running through my mind was the ability to do server side development with Swift much like I have done with Javascript, Java and C#.

I started to review the different options available and I finally decided to take the next step of going from reading/dreaming about the possibilities to actually doing something. It turns out that I have the perfect opportunity as my website for DooScrib was taken offline and I would like to bring it back online (future updates to the plugin planned).

The following is the environment that I have chosen:

There are actually several choices out there and as time progressed I narrowed down the options that I was most interested in to the following:

Kitura is great and has a lot of information as well as the security of have a big name like IBM behind it. However as a personal preference I automatically gravitated towards Perfect and Vapor and have been watching both as they have progressed over the last few months.

To be honest I think both Perfect and Vapor are great choices. At a later time I might actually even pursue a separate review of Perfect.

So for those interested in following I plan to write several different posts over the next few weeks as I setup a Virtual Machine running Ubuntu, install and get Swift running and finally begin working with Vapor.

Many years ago when I was learning Objective-C my initial impression of protocols and delegates was one of confusion. When I first started reading and learning about them and their idea I was expecting something hard to totally comprehend and most likely difficult to implement.

Very shortly however I began to realize that it was neither.

I think that Apple gives a great description for a protocol.

A protocol defines a blueprint of methods, properties, and other requirements that suit a particular task or piece of functionality.

A more simple example (non programming) of protocols is the process of building a house.

You start first with the creation of a set of architectural drawings that are printed (blueprints) and distributed to the various contractors whose responsibility is to create an implementation. Think of protocols as the architects printed blueprints and the implementation of them as the actual house being constructed.

Back to the programming world, and for those that are new to Swift, think of protocols as abstract interfaces which allow you define an interface to be used in the construction of an object.

The process of delegation allows you (the delegator) to notify another object or hand over work to another object (the delegate) which has an interest in your execution. In my opinion you will see it used most often as a form of notification from one object to another.

For the MVC purists that are out there you will most likely be familiar to delegates as the Observer Pattern that glues everything together.

Putting it All Together

In the sample application I am going to demonstrate how you can use a protocol to implement functions used for the purposes of notification as well as how to use them to get information from the delegate.

In the application there will be a button that when clicked runs an asynchronous function which will repeat a unit of work based on a counter. To create some delay and simulate that each unit of work is actually doing something I added a sleep call for one second.

While the asynchronous function is running I want it to do the following: 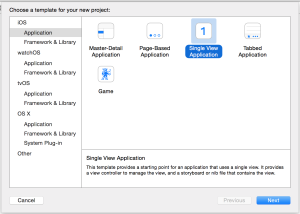 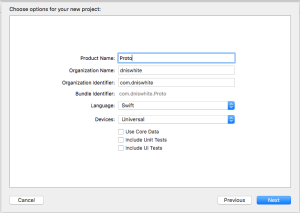 With the project setup complete click on the projects storyboard (Main.storyboard) and add a Label for a status that will get displayed and a button labeled Run Work. 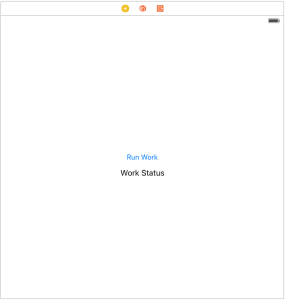 Once you have added those fields and the constraints in place go ahead and give it a test run in the simulator. 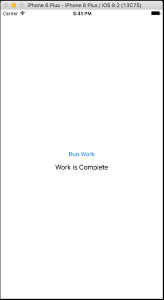 Then control drag and create a property for the Label as well as a function to handle Run Work button when it is clicked.

After that is done you can close the Assistant Editor and you will now begin to work on the code.

Next you will want to add a new file for the protocol.

A basic protocol would be defined as follows:

Here is the code that you will want to paste for the protocol that will be implemented. There are be a couple of parts to this that are different from the normal that I will explain.

Protocol definitions are fairly straightforward when you look at them. You basically define the layout of the function that you expect to be implemented much like you would in any other class. The exception of course is that you don’t supply an implementation.

When dealing with properties you have to make sure that you define them with a var in the front and then follow them with their access method (get set). If you wanted to create a property with a get and set access it would look like the following:

What about that @objc that I added to the front of the protocol definition?

In the requirements I discussed the option of getting notifications as the work progresses. In order to achieve this I marked the workInProgress function as optional meaning that the implementor of the protocol would not be required to implement this. In order to make use of this keyword you have to also mark your protocol with @objc.

Adding this attribute doesn’t require you to now use Objective-C in your development. The only downside that comes from marking the protocol this way is that it means only class objects can inherit from your protocol.

You can get more information about the @objc attribute here.

Next you will want to create the model which will implement the asynchronous function as well as use the delegate the protocol was designed for.

The requirements for the model are simple so lets just create an asynchronous function that makes use of the protocol. I am not going to go into the details of queues and asynchronous programming but for those that want more information you can read a great article about asynchronous operations for iOS here.

In this example the delegate is not mandatory for execution. I did this intentionally to demonstrate how the delegate would be used in the common scenarios where users may not be interested in the notifications.

If you wanted to make the delegate a requirement then you would change the code to look more like the following:

A couple of simple things to notice is that the property is no longer marked as optional and with that comes the requirement of the init constructor. Also notice how the calls using the delegate have changed.

But wait the signature to the workInProgress still has the optional tag. This is because if you recall the function was flagged with the optional keyword.

To implement the protocol open the ViewController.swift and make the required changes so that it inherits from and implements the protocol.

In this example you can make note that the optional function we defined is not being used. This is allowed because of the optional attribute we assigned to the function.

Add the model as an optional property and make sure that it is created in the viewDidLoad function.

Finally change the handler for when the button gets clicked so that it will call the asynchronous function doSomeProcessing created in the model.

With all that complete go ahead and run the application, click the button and you should see the status being updated as the function doSomeProcessing progresses.

For now you can get complete the source here and as always Happy Coding!!!

I started a few weeks ago to write another post about working with RESTful services but I kept running into roadblocks.

Frustrating because the roadblocks weren’t on how to implement everything but rather on how to explain the different facets of implementation. For anyone who has actually followed my posts you hopefully know by now that I try to keep them short and simple (as much as possible).

I still think that writing an example for working with RESTful services can be simple. I just need to cover some of the other basics like Protocols and maybe even the use of NSNotificationCenter as an alternative.

It has taken me a couple of weeks to come to this decision but it’s nice to have some closure. I have been so irritated by the block that I have at times just refused work on it (even more frustrating).

So plan now is to work on supporting articles and then come back at the RESTful approach with those as support.