In this article I will give an example for a realtime application where users can collaborate on a shared html5 canvas using a jQuery plugin I wrote a few years back. I will be using Swift on the server side with the web framework Vapor.

For more information about the plugin that I developed you can review an article that I wrote for it here.

You will of course need to have Swift 3.x and Vapor installed on your local machine and if you haven’t already done this there is a great step by step tutorial you can follow here.

Don’t stop here If you think Swift is only for Apple OS’s because it can actually be run on multiple OS’s and the above instructions will given you an example of setting it up to run on Ubuntu. I wrote this article demonstrating how to setup a Virtual Ubuntu machine for Vapor.

Finally the rest of this post assumes you already have a basic understanding of HTML, Javascript, Swift and Vapor. For those wanting to learn more about Vapor there are some great how to videos and articles to get started here.

I don’t plan to cover the details of laying out the page but for a quick demonstration of what everything will look you can go here.

To make communications between the clients simple I will be using JSON objects.

The following code will be used to store and manage the WebSocket communications that are sent and received:

For messaging to the server I added the send function which will send the JSON objects that are passed as a parameter to it.

Whenever a message is received the onmessage function is called and from there you can switch on the command type (added to the JSON message) and take the appropriate action. Currently the following commands (JSON objects) are of interest for handling inside the browser:

The following code is for setting up the jquery plugin as soon as the page has been loaded and is ready:

The drawing for the current surface is handled by the plugin which then messages everything that it is being done. With each message there is JSON message created which is then sent to the server which will redirect to all the other users.

For the server implementation I created the following Controller object which handles all of the WebSockets communications as well as routes for the different web pages:

I won’t be covering the get route handlers that are established in the controller with any great detail. From the code you however you can see that they are sending back the pages the user requested.

Much to my surprise the WebSocket class does not have a function for sending JSON packets so I created the following extension to handle that:

Messages are handled via the onText EventHandler which is called with a WebSocket and String passed in via closure. The string data is parsed into a JSON object so that command and user id that should be sent with each message.

For the connect message the user id and accompanying WebSocket are saved in the dooscribs dictionary and then a connected message is created and, much like the clear message, it gets to sent to all of the connections.

The other messages that are received get forwarded to all of the current connections with an exception for the one where the message.

Each connection will be stored in the dooscribs dictionary which is a pairing of the unique id that was generated by the browser and the WebSocket for their connection.

Whenever a connection is closed (user leaves page, closes browser) the onClose handler is called informing of the event. For cleanup purposes send a disconnect message to all of the clients that are stored in the dooScribs dictionary, minus the connection that just closed, as well as remove that user from the dictionary.

Something I noticed in my development was that clients were disconnecting for what seemed at the time as unknown reasons. After some research I found that “quiet” connections will automatically get disconnected. To handle this I created the background handler so that it would ping the socket every 5 seconds to keep channels open.

Hopefully this gives you some ideas for processing realtime data in your applications. In the future I plan to expand the dooScrib application so that it can handle different rooms as well text based messaging. The code for the dooScrib plugin as well a Node.js Implementation and this Vapor implementation can be founder here.

For now enjoy and as always Happy Coding!!!

Ok so what I am about to discuss might be old news for most but for me it’s new. After discovering this I have to admit that I am a bit disappointed in myself for not already knowing this.

When implementing asynchronous methods in Node I had always done the following:

It was recommended by someone that I change this out for the process.nextTick(cb) method. Being a firmware developer in previous lifetimes the pure mention of tick had me intrigued.

Was it actually processing CPU ticks?

Turns out the answer was No but still what I did find was something far better than a zero based timeout. I had always known that setTimeout(cb, timer) with a zero based timer was never going to be accurate but I had decided it was the best I could ever get.

To get an idea of a difference between the two I wrote the following to measure setTimeout:

I then changed the program to use process.nextTick() like the following:

All work and no play makes J Dennis a null boy. 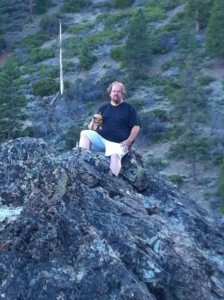 So one of the wonderful things about living here is that regardless the season we always have something great to do outside. During this time of year we go on a hike each Wednesday with a group of friends. Usually a great time to unwind and not have to think about anything work.

The trick or struggle always for me is to not think about anything work related and to just relax and enjoy the surroundings. I always enjoy spending the time outdoors whether on my bike, camping with family or on a hike like tonight. However without fail I am always working out a problem in my head at some point.

So I am proud to say that I actually made it through the hike without thinking about any problems I am currently working on. Breakthrough!!!

Tonight I created a new problem and worked on it during the hike. How is that for progress?

Recently I saw a demo on AngularJS and I was thinking on my hike how hard would it be to redo a jQuery plugin I did for displaying a twitter? The following is what I came up with:

For now I was thinking of something really simple. Once I got it pulling data from twitter and displaying something I knew that the rest would come easy.

So before I get deep into the code of AngularJs let me give a sample of the jQuery plugin I had done awhile back.

Probably not one of my greatest achievements but at the time of it's creation it was simple and served to solve a problem that I was working on at the time. Granted a majority of the code is that twitterTime() function it always bothered me that I should have been able to make it simpler.

So would AngularJs save me or would my idea burn? Here is the javascript that I came up with.

For now I hardcoded the name of the twitter feed being retrieved to mine. As I went to test it I could see that the error() function was being called. What could be wrong with my perfectly small piece of code?

Fire off my old jQuery plugin and sure enough it's no longer working. Did I ever deploy this code and if so what site did I deploy it on? Somewhere out there is a site with a broken twitter feed.

Take out the url from the code and lets give this a test.

So it appears that for now I am temporarily stuck and I will need to resolve the new API (this requires OAuth). I hate to end blogs without resolution so instead let me say "Stay Tuned"

Maybe it wasn't such a breakthrough to not think about problems during tonights hike.